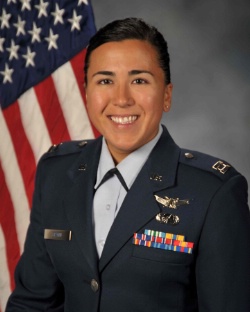 The Space-Based Infrared System (SBIRS) is a 21st Century space surveillance system designed to improve America’s ability to detect and track long-range and short-range ballistic missiles.  It is also a program under Congressional scrutiny due to repeated cost overruns.  That makes working on the program a high-stakes game with no room for failure – an environment in which Captain Cheronda Spann has thrived, according to the man she reports to.  Calling her the #1 ranked officer in her category, Lt. Col. Jack Allen said, "It doesn’t get done without her.”  Responsible for assembly, integration and testing of the $3bn GEO-1 satellite of the system, Capt. Spann has taken the lead in pushing the program successfully through major choke-points with a combination of strong leadership, skilled diplomacy and a talent for team-building.  In one instance, she led a team of 17 engineers and scientists through a rigorous 65-day, $13m thermal vacuum test.  A botched test risked setting the program back by 10 months at a cost of $1 billion.  Her success with the test won her the Wing Company Grade Officer of the Quarter award and helped ensure full-mission operation for the life of the satellite. In an even tougher challenge, she became the government’s lead in overcoming problems with interaction between flight software and the satellite hardware.    By reprioritizing resources and tasks, personally driving testing and integration efforts, and skillfully interfacing government and commercial teams, she boosted software productivity by 300% and met the tight acquisition timelines for the project.  Despite her workload, she finds time to hone her skills through Defense Acquisition University courses and to volunteer in her community.  She led 20 members of her unit during the last holiday season to support the Los Angeles Food Bank, raises funds for AIDS Project Los Angeles and is a regular visitor to patients at the local Veterans Administration hospital.