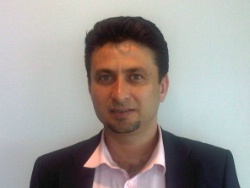 Salespeople sell.  Engineers compute. But in technology-driven businesses like satellite, some outstanding employees do both.  Shlomi Izkovitz is a model of the successful sales engineer, who combines a strong technical background with creative selling to make major contributions to his company.  He joined RRsat as a master control room technician while studying for his B.Sc. in electrical engineering.  With that degree in hand, he moved into a position as a field engineer.  But in 2005, he caught the eye of Lior Rival, the company's vice president of sales and marketing, who believed that Shlomi had much more to offer.  He was quickly proven right.  Focused first on Europe, Shlomi gained RRsat's first government customers and expanded sales into eastern and central Europe and the Middle East, achieving +30-% year-over-year revenue growth.  He developed and expanded cooperative ventures with Eutelsat, the Russian Satellite Communications Corporation and Gazprom, and established new satellite relay stations in Europe that expanded RRsat's global network.  Lior Rival calls him a "key player" in generating revenue growth from US$43 million in 2006 to almost $100m in 2009, in the face of the global economic downturn.  He now heads a 20-person department and has helped establish a worldwide network of over 100 RRsat sales representatives.  As a manager of others, he has also shown the temperament and skill to bring out their best.  Lior calls him a "team-builder, who inspires confidence in his co-workers" and a "generous mentor for other team members, always glad to share sales techniques he has found to be effective."  It was in recognition of this growing maturity, as well as his achievements with customers, that RRsat named him its Manager of the Year in 2010.