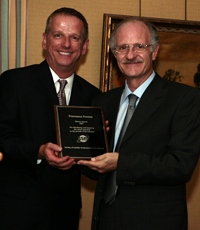 Mr. Frenza, who started his career as a lab technician, is credited as the "father" of television development in Venezuela and much of Latin America. Working closely with both undergraduate and graduate engineering students on their thesis development, he has mentored a generation of young people who now hold senior management positions at Claxson Interactive Group, Harris, HBO Latin America, Scientific-Atlanta, Sony, Harmonics, DirecTV, and A&E Latin America.